Simple pixel art character generator. As usual: I appreciate credit and sharing a link if you don't mind, but it's not required.

PERMISSION IS GRANTED, FREE OF CHARGE, TO ANY PERSON, TO USE THE ASSETS GENERATED WITH THE SOFTWARE IN ANY COMMERCIAL OR NON-COMMERCIAL PROJECTS, GAME OR OTHERWISE, AS LONG AS THE ASSETS ARE NOT USED AS SO CALLED NFTs (NON-FUNGIBLE TOKENS).

THE SOFTWARE IS PROVIDED “AS IS”, WITHOUT ANY KIND OF WARRANTY.

Will it be possible one day to add custom base/heads/faces, or accept community-created content for that? It would be really cool to have things like robe hoods, viking helmets, etc.

you can already! export config, modify, and import it - still needs some work, but basics like adding hats should work

Interesting, thanks! Might need to look into it some more to figure out how to use it properly.

I'm making a scratch game with this, i'll send the link soon

This generator is really amazing ! I think i'm gonna use your assets to make a game prototype (i love pixel art games especially when using the simplest color palettes) :) your different projects are all stunning, what a talent...

What an absolute time saver.

I Used Your Amazing Tool For a GMS Horizontal Movement Tutorial... Thanks.

The app was updated so now you can also <b>export zip</b> to get all the frames separated right from the generator :)

Your Spanish is Fine! Are you sharing the code somewhere? I'd really like to have à look!

While I appreciate the sentiment and you’re free to do as you wish, I just wanted you to be aware that the prohibition on NFT use means that your license can’t qualify as open source (or any of its cousin terms like Libre which are basically the same thing in different words).

The problem is clause 6 of the Open Source Definition, which the prohibition on evil in the JSLint license also tripped over:

No Discrimination Against Fields of Endeavor

(Also, if you decide to change it, I highly recommend going for a standard license. Even some standard ones are landmines in jurisdictions like Germany where you have to tie yourself in knots to explicitly give up various legal protections and protect downstream users from your right to sue them over privileges the law decides to retroactively grant you in the future. For example, CC0 is much preferable to The Unlicense for exactly that reason.)

If disallowing scams in my license is a not enough freedom for someone to label me something. I’m fine with it.

The problem with the evil clause was that people who do evil won’t see those actions as evil (be it nfts, stealing money, murdering people or the planet) so the clause was too vague to be applicable.

The ambiguity of legally defining “evil” was the bigger problem, but not the only one.

Either way, I highly value being able to pass on the right for other people to carve up my projects and remix the pieces without any unusual license terms, so PDM is still unsuitable for my use-causes.

I'm fine with it.

I don't believe that "Open Source" always has to mean exactly what the Open Source Initiative claims, they have not trademarked the term or something like that.
I think it's very weird to make unfounded complaints on a project that is giving you free access to things. Better to just show gratitude instead!

They created the term and, from what I remember, it would be a registered trademark if not for a whim of the trademark office deciding it was just a little too generic for them to feel comfortable granting a trademark registration for.

I believe it should be a standard term and, even if you disagree, a great deal of the term’s value comes from being basically identical to the definition of Free Software as defined by the FSF’s Four Software Freedoms and Debian Linux’s Debian Free Software Guidelines, except couched in more apolitical language, less confusable with “free as in price”, that companies can feel comfortable with.

Freedom 0 of the Four Software Freedoms is “The freedom to run the program for any purpose.” and point 6 of the DFSG is “No discrimination against fields of endeavor, like commercial use.”

Aside from that, culturally, it’s de facto standardized to be what’s laid out in the OSD and if you try to undermine its meaning like that, you’re just setting yourself up to be seen as a bad-faith actor who’s trying to cheat the system… similar to Microsoft’s “Shared Source” initiative.

(Or like the extreme feminists who get upset when their spin-doctoring of “feminism” backfires and people decide “I guess I was mistaken about being a feminist” and go looking for new words like “egalitarian” rather following along with the shifting definition of the word they originally chose.)

Fundamentally, the principles that were laid out are intended to allow software to behave like mathematics. You don’t get to use the pythagorean theorem for free normally, but have to pay a license fee if you decide to use it for NFT purposes.

If the OSI were to change the OSD to allow restrictions like that, it’s very likely that people would reject the changed version, declare the OSI to have become infiltrated by corporate influences, and start referring to the current version of the OSD (Version 1.9, last modified, 2007-03-22) as the authoritative definition of what “open source” is.

I'm sure we could have a fun debate about license technicalities or rms's and Kant's disregard to consequences. Nothing wrong with a small talk. It's just that I already don't know what your point is.

Also: your anti-feminist non sequitur is not appreciated

I’m sure we could have a fun debate about license technicalities or rms’s and Kant’s disregard to consequences. Nothing wrong with a small talk. It’s just that I already don’t know what your point is.

My point is that “Open Source” has an agreed-upon definition and companies have a history of trying to language-lawyer and spin-doctor it in bad faith in the past (both directly and through terms like “Shared Source”, “Open Core”, etc.), so odds are that anyone who tries to argue the definition is just going to be assumed to be a bad-faith actor by the community at large.

Also: your anti-feminist non sequitur is not appreciated

I proudly call myself a feminist. My issue is with extremists (feminist or otherwise) ruining that and other terms for the rest of us in their attempts to “voodoo doll” people’s perceptions and affiliations by spin-doctoring the language.

In fact, if you look at it fully generally, it’s the same phenomenon which drives what Steven Pinker dubbed the euphemism treadmill. People keep trying to escape the bad associations of words but, because the “bad thoughts” and “bad intentions” (to borrow George Carlin’s phrasing) remain, the euphemism eventually takes on the same corrupted association as society acclimatizes to using it.

(In a sense, it’s yet another expression of humans looking for simple solutions to complex problems.)

I don’t believe it’s a non-sequitur because, from the beginning, I’ve been talking about terminology and how people see its use.

Likewise, I’ll readily admit that RMS is an extremist, and I think his argument that “Linux” should be called “GNU/Linux” is based on a deceptive and unhelpful definition of what is and isn’t part of an operating system and completely ignores the relationship between humans and syllable counts in English terms.

(Seriously. X11 contributes more to the platform than GNU, but he hand-waves that by declaring that you don’t need a GUI to self-host operating system development with console emacs and GCC (which is a not insignificant part of GNU’s size) counts as part of the OS despite not being installed on most systems unless you need it to compile the nVidia proprietary driver’s “GPL condom” because the definition of an OS is, according to him, everything you need to self-host its development and not one jot more. …and if you want to talk about it from a binary compatibility standpoint, then it should still be glibc/Linux or X11/Linux, not GNU/Linux.)

Love the update, could you make some more bases (similar to the ones in your dungeon tileset) i.e. larger

Awesome update, I used this tool as a base for the sprites in a little game I made for a jam.
https://anarch16sync.itch.io/viteris-revolution

Thanks for making this available to everyone! I used this to make the hero in my game for Metroidvania Month Jam 13: https://azecy.itch.io/gemful-caverns

This is very cool. I can buy this tool ?. i can change picture input ?

Amazing tool! one thing though, even if it’s x16, when I tried to use id on Unity for a grid size object (16x16) some sprites are way bigger (specially the ones with hats). Do you know any workaround? I just need a SpriteRenderer to be 16x16

well, the idea is they are to be used on a level that is build of 16x16 tiles but the characters themselves are 16x24 so they kinda spill out to the top tile.

this works well both from 3/4 tilted view (like nuclear throne, crypt of necrodancer, enter the gungeon and similar) or entirely side view (most platformers, Mario could be 2 tiles big after eating the shroom!)

Don’t know your use-case but hopefully it helps :)

thanks for the fast answer! yes, I understand. I’ll see what I can do. thanks again for the help :)

whew this is so cool. I'm probably gonna make a game with this!

Can I modify it? I wanted to make my first modded app/"game"

yeah, you free to use it however you want

Can you make a custom dude?

You can make a custom dude with https://0x72.itch.io/pixeldudesmakermaker :)

I made this game with these, thanks dude. You awesome :)

may i use the character i made in my games?

yes, this is the whole point

nice job with the different customizations!

Can I get the source?

Feel free download the app from itch; I don't have anything else.

hi! thats sooo awesome. im working on a game with your tileset. and this is just OMG! <3 I have just 1 Question: your DungeonTilemap has sprites for Run, Idle and Hit. but here its Jump instead of Hit. would it be possible to add "hit" to the generator?

This is a very quick and dirty prototype I'd probably need to do some refactoring; but yeah, it would be quite possible.

Although I have a couple of ideas for the version 2, which might be a time better spent...

Where will I find time for any of that though?

well, of course I don't want you to have unnecessary stress because of my unimportant request. When I wrote the previous post I didn't really think about what kind of time it would mean for you. I guess I shouldn't be so lazy and make my own "hit" sprites.

Thank you for the quick answer. I love your work. <3

Don't worry about that too much, the request is reasonable, I'm just unable to process it now. Anyway, thanks for the kind words! : )

didnt use yet but love it

Hi, can you make the maker scrollable for mobile views? (If its possible.)
Btw, great work!

uh, not sure how you're going to use it in mobile but here you go

Can I modify it? I'm currently adding the "spin-offs" tilesets items 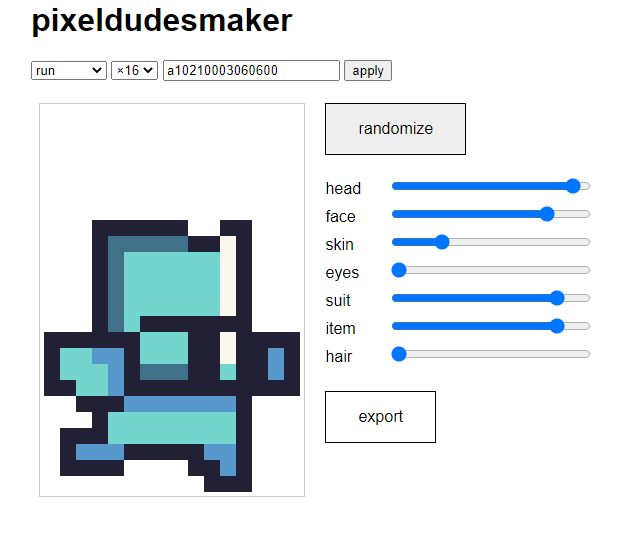 Heya! I just published the mod, hope it wont be a problem :D

very good!! I will make a game with these sprites, when I finish I hope you play, I will share the game link after I finish it 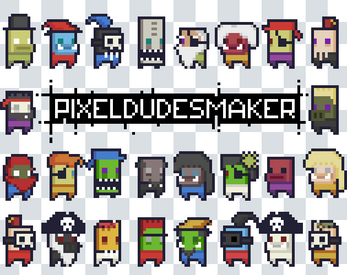